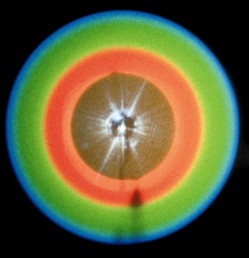 For an explanation of this beautiful light you don't need to read the book. You can just watch our movie.

We work on high accuracy detection efficiency at photon counting levels. This is a particularly difficult task as photon-counting detectors can only handle very low levels of light before saturating or being destroyed, (that is 10-10 W) while typical detector calibrations require significant amounts of light (10-4 W) so that the noise of the detector does not lead to inaccurate measurements.  To bridging this gap we have created some very high gain but very low noise detectors to be used as transfer standard devices to allow the efficiency of photon-counting detectors to be accurately determined. If you have an interest in such accuracy we would be very interested in a potential collaborations.

We have a program to advance single photon detector technology. One effort adresses the problem of photon counting deadtime, which can significantly limit the maximum rate at which a detector can count photons. To reduce the effect of this problem, we have developed a scheme that multiplexes a number of detectors by an optical switch that remembers which detectors have fired last and directs incoming photons to a detector that is live. This scheme allows the detector system to operate as much higher count rates than is possible with a single detector.

Another issue that limits the maximum photon counting rates in some detectors is afterpulsing. This happens with the most common type of photon counting detectors- avalanche photodiodes. After this detector fires due to an incident photon there is a dead time to allow the detector to recover and be ready to detect a new photon. Unfortunately, when the detector is reactivated, there is a finite probability that it will issue a pulse, even with no incident photon. The probability of this false pulse decreases with the wait time before reactivation. To deal with this issue and reduce the rates of this afterpulsing, the detector is typically held off for a time that extends much beyond the deadtime. This further limits the maximum rates at which the detector can count photons. We have an ongoing program focused on this issue with a goal of increasing maximum detector counting rates.